After Some Success, It’s Okay to Get Wrecked

The whole idea behind Maxin’ Out n Blackin’ Out is to encourage a healthy balance between the lifter’s and athlete’s lifestyle and the partier’s and college kid lifestyle. This blog is supposed to help reinforce such ideas. After winning one of his many Mr. Olympia’s, even Arnold Schwarzenegger relaxed and took it easy from time to time, especially after his famous 1975 Mr. Olympia Win where the infamous photo of him smoking a joint was taken. Or, you can take a more modern day example from Michael Phelps, when the infamous photo of him smoking a bong surfaced upon the internet during February 2009.  After special accomplishments within your sport, whether it be a PR (personal record) in powerlifting, weightlifting, strongman, or CrossFit. Or maybe it was a big bodybuilding or physique win, or your team won the playoff game in crunch time. Or maybe you improved your stats from the year before, or maybe you simply had a killer session working out. Even the big time greats like Arnold and Phelps relaxed after they put in their endless amounts of tremendously hard work. Go hard at whatever training for whatever sport you are involved in, and give it 110%. Work until you cannot work any longer, put in the effort until you have diminished all macronutrients in your body which fuel your activity. Work until you cannot train any longer, and put in the effort. However, once you give it your all, once it’s all said and done, THEN it is okay to kick back and relax and is perfectly fine to crack open a cold one or light up a doobie, just like Arnold. 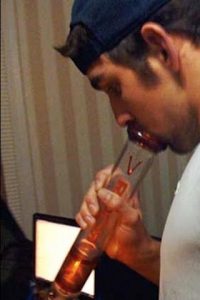