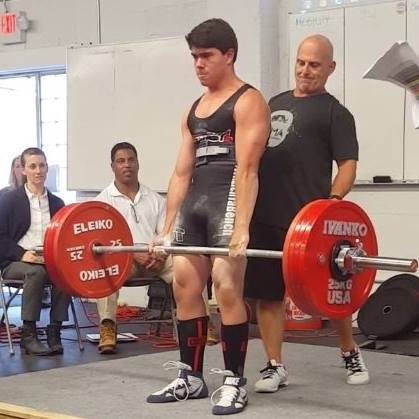 Competing in Powerlifting is one of the best thing’s I have ever done. I’ve only competed twice but have been dealing with a lot of tough stuff lately that have sort of held me away from the platform, but when I’m confident I can get good enough numbers I will compete again, as there is no sense in stressing yourself over competition if you know you are not ready. But when I do get back on the platform, I know it will be an incredible time. Being on the platform at first is kind of scary, as you’re maxing out in front of an entire crowd of lifters and people you don’t know, so it can become kinda awkward and nerve-wracking because you don’t really know what it will be like if you fail. However, once adjusted, the platform is not a scary place at all, even when you fail a lift. In fact, it’s like a second home. Being on the platform is an overwhelming adrenalin rushing sensation; it’s incredible. You’re giving it your all in front of a crowd who often times always cheer you on and clap for you. It”s like you’re the star of the show for a second, everyone is cheering for you and your success when you hit a lift, and they congratulate you on your hard efforts when you have failed. People I didn’t even know at the meets I competed at cheered for me and it’s an incredible feeling because it shows people are interested and shows that maybe some people even cared, which means everything to me. It’s a comfortable place where I can push my limits and be cheered on in an environment surrounded by people with the same passion. It helps you meet people who can push you further towards your goal of self improvement. The platform is an amazing place, and I cannot wait for my return. Despite some fear, which is normal for me at least, I know my return to my second home, the platform on my next competition day, whenever that may be, will be something to remember.

Throwback to my 2nd attempt squat at 342 or something at my first meet back in august. Im lookin forward to competing again this summer. @noriegapowerlifting pretty sure thas you spotting me in the back @mikebrandtberg @djglaza13 @raf_cmc_ @alex.m3 #powerlifting #sbd #gains #roelpowerlifting